Is the Arab world waking up after taking a vacation from History during the past few centuries (as Daryush Shayegan puts it in his book, Cultural Schizophrenia: Islamic Societies Confronting the West)? 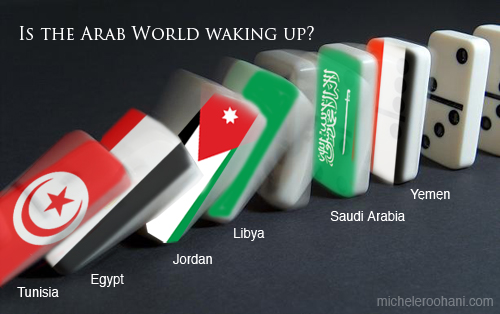 I made this image with the hope of freedom (and finally some democracy – even half baked) in the Middle East.

Recipe for volatile social cocktail: “a youth bulge, vast unemployment, inadequate education, and gross economic inequality. but are the richer Arab states immune? There is anger about entrenched authoritarianism and subservience to America’s strategic agenda for the Middle East – especially its  support for Israel’s oppression of the Palestinians”. Middle East’s reaching a tipping point…

To see some of the brave women of Egypt go here.

I have read it in French: Le regard mutilé

6 thoughts on “Are Muslims coming back from a vacation in History?”