Drive forty minutes from Bordeaux, and you will get to the most amazing wine country of the region, Sauternais, or the only area around Bordeaux where the noble rot grows. 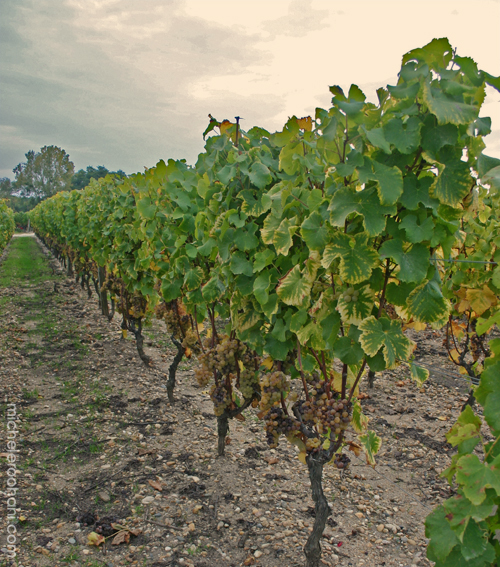 A most peculiar wine is produced here that has not much to do with the red Bordeaux wines that we all know (red or white). Sauternes is made from grapes that have been affected by a gray fungus, Botrytis Cinerea,  which causes the grapes to shrivel, leaving a sugary fruit with concentrated flavors resulting in distinctively flavored wines. 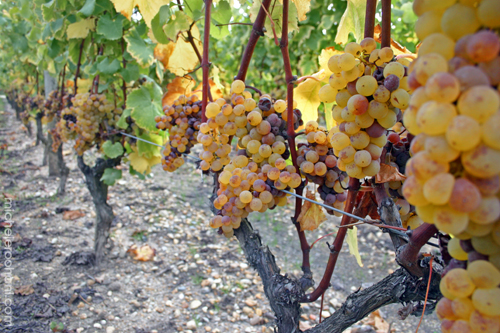 I had heard about the Noble Rot (an oxymoron of a name) but I was still amazed to see these grapes on the vine stocks: 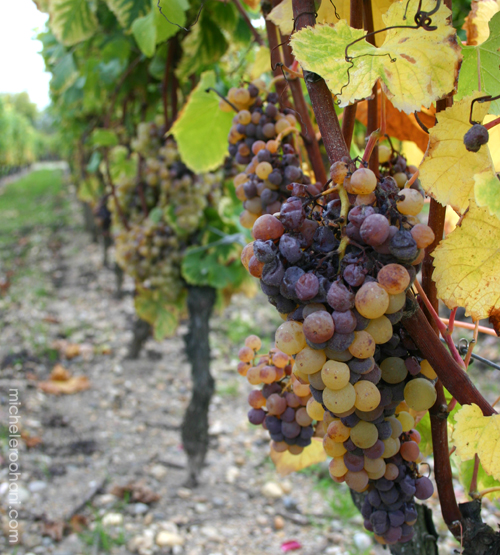 The grapes are definitely getting ripe here, all semi rotten! The best Sauternes come from vines that have been hand-picked—up to 12 separate times—to ensure that the grapes are not removed from the vines before reaching the perfect degree of ripeness required for these wines. 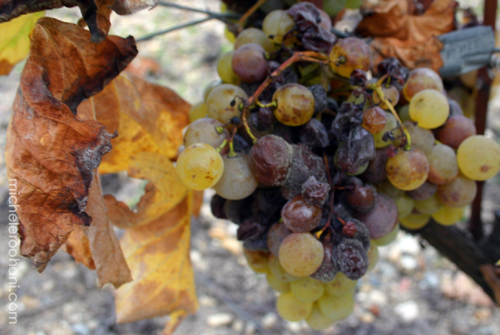 The eminent Château d’Yqem, the most expensive Sauternes wine, is the only estate in France who has received a class of its own, one step above Premier Crus. Each grape is picked individually, and only when it is rotten enough. Thanks to the noble rot and a lot of hard work, the result is an exquisitely flavored wine that is acidic enough to avoid falling into the trap of being a mere dessert wine. 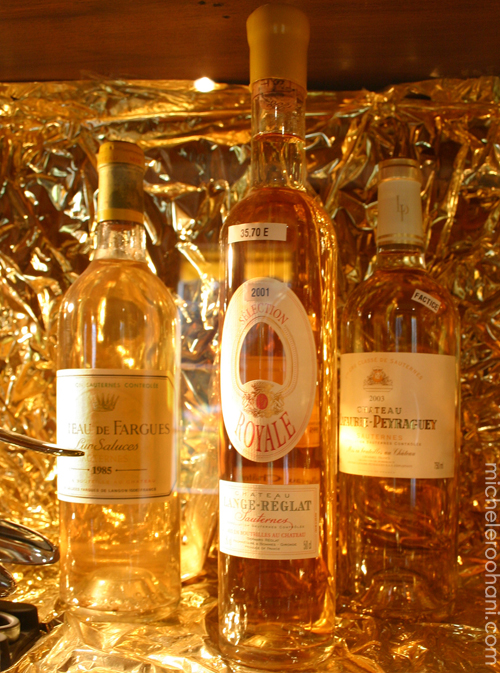 The Sauternes region is located 40 km (25 miles) southeast of the city of Bordeaux along the Garonne river and its tributary, the Ciron, which demarcates Barsac (Orange on the map) and Sauternes (yellow on the map). Barsac lies within Sauternes, and is entitled to use either name. Somewhat similar but less expensive and typically less-distinguished wines are produced in the neighboring regions of Monbazillac (which I tasted  a couple of years ago when visiting Bergerac) , Cérons, Loupiac and Cadillac (not the car)! 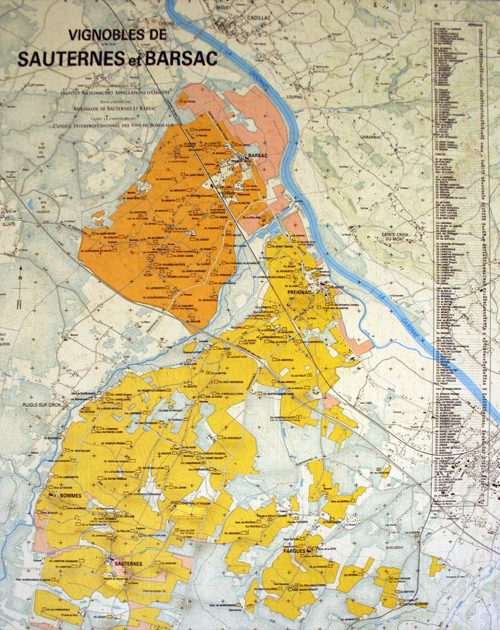 The moisture the Ciron brings, and the morning mists it causes, are favorable to the development of the fungus Botrytis cinereangus. This contributes to the high quality and renown of Sauternes wines.My guide explained that vines produce one to two bottles of wine everywhere else, but in Sauternes, you can only get one to two glasses per year! No wonder this wine is so revered (and expensive)… 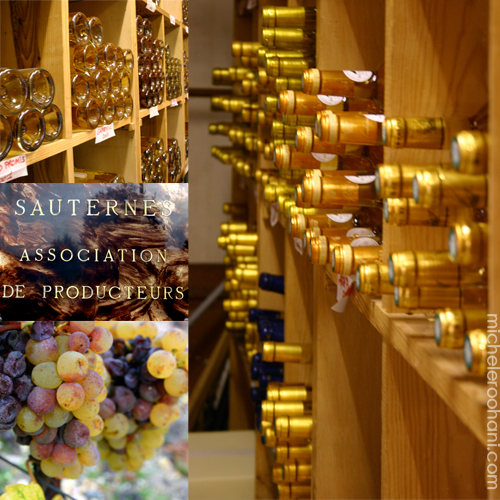 Not having money to burn, I only bought some of the more modest bottles after the tasting: 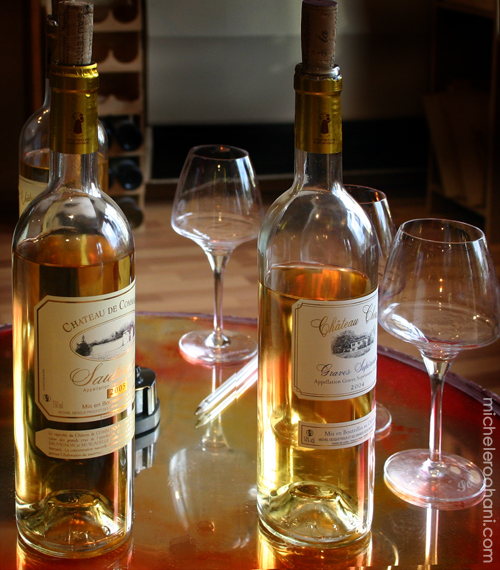 Of course, there are myriads of labels to choose from: 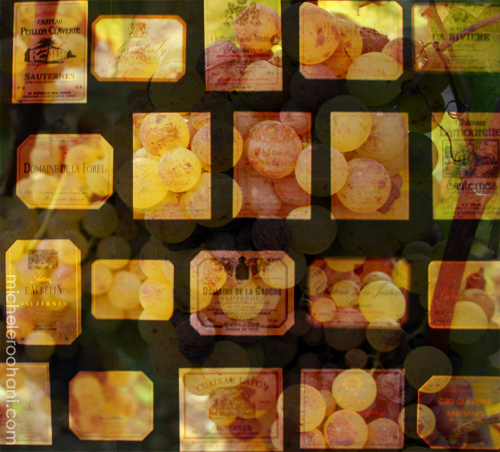 like these bottles with ample and intense golden liquid inside… 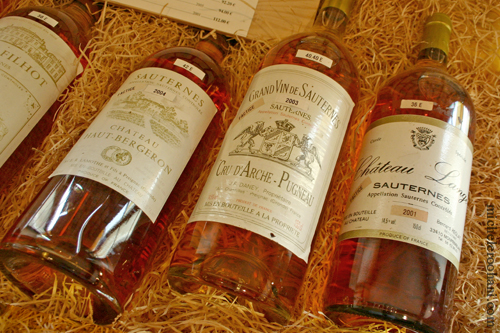 You wonder how on earth with amazing wines like these in the region, 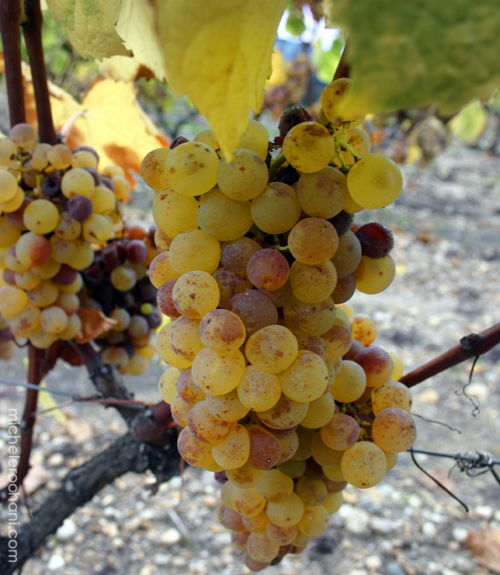 some of the locals drink coffee… 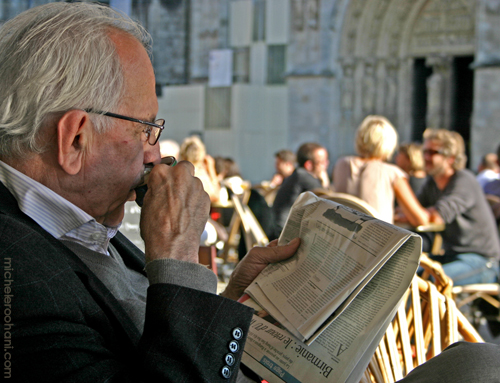 A night with some dry drunk Persians here

8 thoughts on “Noble Rot, the liquid gold of Sauternes”